Clarification on flags: common reasons why we flag campaigns as Inappropriate Ad Image or Headline

Written by Tamar Koridze
Updated over a week ago

The numbers of the following sections are referring to the Flag Numbers used on the RUNative platform.

These guidelines are what we consider the best practices for advertising on RUNative.

Please, keep in mind that when any kind of flag is applied, your campaign may have some limitations for access to all of our traffic sources. We recommend staying within our content guidelines in order to receive the highest volume and the highest quality of traffic for your campaigns.

If you find your campaign has been flagged and the traffic is limited, you can find out what we detected by clicking on the flag in the ads page when editing your campaign.

RUNative will flag the campaigns that include inappropriate ad images categorised as mention below.

Grade 2: Significant amount of nudity. For example, an image with close up depicting a female wearing G-strings, thong, any kind of transparent clothes or item that is just hiding genitals - the person is still considered as nude but covered.

Grade 1: Mildly provocative cartoon images. For example, a cartoon image where a girl is fully dressed but the outfit is sexy with the intention of provoking sexual interest in a moderate way. Here, a big part is upon the context like position and mimics.

Grade 2: Moderate provocative cartoon images. In comparison with grade one, grade two images are much more explicit. They are not only intending to provoke sexual desire, these images have a clear goal of sexual arousal by means of body language. For example, an image with a girl taking off her clothes in a sexually suggestive way, showing sexy lingeries.

Grade 1: Cartoons containing implied sexual activity. Images leaving little to the imagination. For example, a cartoon image depicting a couple kissing or touching each other in a slightly sexual way. 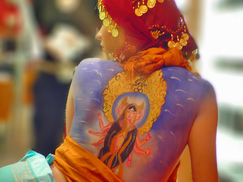 Rejection case: Ad image contains naked bodypaint images. In this case, an image is depicting human genitals, nipple, areola. It has much more pornographic content rather than artistic. 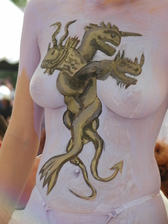 Grade 1: Ad images depicting real people in a mildly provocative way with the intention to provoke sexual interest in the audience. For instance, in an image of a girl wearing a sexy outfit, the girl is sitting on her bed. Here, a big part is upon the context like position or mimics.

Grade 2: Ad images depicting real people in a moderate provocative way, with an intention to provoke sexual arousal in the audience. Images are sexually explicit by means of body language. For example, an image with a girl taking off her clothes in a sexually suggestive way, showing sexy lingeries.

Grade 1: Images with real people containing implied sexual activity. For example, a couple in the bed touching or kissing each other in a slightly suggestive way. Images leaving little to the imagination.

Grade 2: Images with real people containing explicit sexual activity. For instance, an image depicting a face of a woman or man expressing pleasure from sexual activity. This kind of images leaves a lot to the imagination.

Grade 1: Ad image without close up slightly depicting cleavage, where 1/3 of cleavage is covered by clothes but a woman is wearing a dress with a low neck in order to demonstrate her breast.

Grade 2: Moderate depiction of cleavage, in this case we have a focus on cleavage, low cut garment or bikini top is covering less than 1/3 of the cleavage.

Rejection case: Strong depiction of cleavage, no clothes on or transparent clothes with areola visible.

Flagging case: Ad image containing yoga pants with inappropriate use and depicting a different meaning rather than actual purpose in yoga activity. 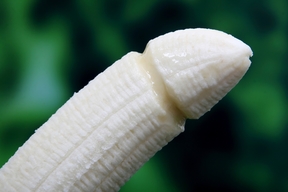 Flagging case: Ad image containing text on the creative. For example, an image with a logo.

Flagging case: Headline with the intention to offend a specific group of people or individual in a moderate way. Headline mentioning race, ethnicity, religion, sexual orientation, gender identity in a slightly negative way.

Flagging case: Headline referring to sexual content. For example: "Can You Imagine She Is Ready For...", "Mature Women Are Looking for New Experiences Right Here!"

Rejection case: Headline directly referring to sexual content by a call to action, for example: "Looking For Sex in {city}".

Rejection case: Headline with explicit direct sexual activity. For example: "She Wants To Feel A 🍆 Inside Her".

Rejection case: The whole headline consists only of emojis.

4.17 Headline implies that the offer is adult